The City of Fernie Coat of Arms, along with our Flag and Badge, were presented to the City by the Honourable Iona Campagnolo, Lieutenant Governor of British Columbia and Robert D Watt, the Chief Herald of Canada, Robert D. Watt on February 12th, 2004 - our Centennial year. 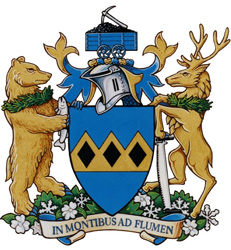 Each element comprising the Coat of Arms is symbolic. Read the following article to learn more about each element and its symbolism.

Arms: A horizontal band of gold with a saw-toothed upper edge appears upon a blue field. Beneath each point of the gold band is a black diamond.

The gold represents both the wealth historically generated by the coal and forestry industries in the area and the sunshine which now makes Fernie an important recreational resort destination. The three "peaks" in the upper part of the shield represent the Three Sisters, the most famous of the dramatic Rocky Mountain formations visible from the town. The blue below the gold band symbolizes the Elk River on which Fernie is situated. The blue above the band represents the sky. Black diamonds are the traditional heraldic representation of coal and thus represent the great coal mines which led to the City's initial prosperity.

Crest: A blue coal car, modeled on those used in the mines near the City, is filled with coal. A white miner's pick rests on this. This is placed on a steel helmet draped in blue and gold cloth mantling held in place by a wreath of twisted cloth in these colours.

The historic and ongoing importance of the coal industry to the City is symbolized by the coal car. The pick represents both traditional methods of coal mining and the pioneer miners.

Motto: IN MONTIBUS AD FLUMEN, meaning "In the Mountains by the River", captures the enviable location of the City, so crucial to its history and economy.

Supporters: To the left of the crest is a gold grizzly bear wearing a collar of green cedar. It hold in its right forepaw a white trout (modeled on a Westslope Cutthroat Trout). To the right of the crest is a gold elk with a similar collar, its left foreleg resting on a crosscut saw. The bear and elk both stand on a compartment of green grass set with white snowflakes and white dogwood flowers.

The elk and the grizzly are common large mammals in the region, the elk also giving its name to the valley where the City is located. The two animals thus represent Fernie's rich natural heritage. The collars of cedar represent the cedar forests, the largest such trees in the province outside the Pacific coast. The trout represents the importance of the local recreational fishery, and the saw, the increasing importance of forestry.

The grass in the compartment symbolizes the lands of the City itself. Fernie's status as a city of British Columbia is expresses through the use of the dogwood flowers. The increasing importance of winter recreation is dramatized by the snowflakes.

Badge: A black diamond on which is the head of an elk turned slightly to the left.

The badge repeats some of the colours and themes of the arms through the use of the reference to coal and to the Elk Valley and River. The elk's head is featured on the City's current seal.

Flags: The first flag is gold, with a square version of the shield of arms placed in the upper left corner. In the lower right or "fly" is the City's badge. The ensign-style banner repeats the ideas of the Elk River and Valley, coal and the wealth derived from the mines and the landscape. The second flag is the classic banner of heraldry with the shield redrawn to fit a rectangular shape.